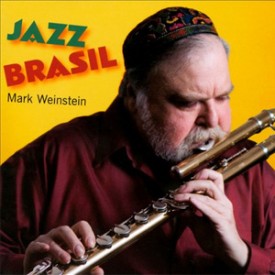 NEA Jazz Master Kenny Barron needs little introduction, having recorded extensively as a sideman since the early ‘60s in addition to his numerous albums as a leader. The pianist has developed a personal sound that is readily identifiable, adding value to any session in which he takes part.

Mark Weinstein began his career as a Latin jazz trombonist, before leaving music to teach philosophy for a time, picking up the flute as a hobby. While retaining his love of Latin music upon his return to playing professionally on his new instrument, Weinstein also widened his scope to include Brazilian music. Jazz Brasil includes Barron, bassist Nilson Matta and drummer Marcello Pellitteri and explores Brazilian and jazz favorites. The former works are well suited to flute, especially the upbeat “Triste” and the subdued, bittersweet “If You Never Come To Me”, the latter with the leader playing alto flute and showcasing Matta’s intricate solo. Two fine originals, Matta’s invigorating “Sambosco” and the flutist’s “Dawn’s Early Light”, also merit praise. Weinstein plays concert flute in his breezy setting of Monk’s “I Mean You”, switching to bass flute for a deliberate, mellow treatment of the pianist’s “Ruby, My Dear”. The leader uses alto flute on Wayne Shorter’s “Nefertiti”, with Barron’s shimmering solo as its centerpiece. This is easily Mark Weinstein’s finest recording to date.

Flutist Mark Weinstein has an extensive background in salsa, Latin jazz, and modern big band jazz. Odd thing is, in those days—the 1960s—Weinstein was a renowned trombonist (and sometimes arranger) with Eddie Palmieri, Larry Harlow’s Orchestra Harlow, and Tito Puente. On the jazz side of the street, with Maynard Ferguson, Thad Jones/Mel Lewis, Lionel Hampton, Clark Terry, and Duke Pearson, and intermingling the two with Cal Tjader. After retiring from music in the early ‘70s (into academia: Philosophy), he was “born again” as a flutist circa 1978. Weinstein seemed determined to make up for lost time—he’s helmed about a dozen discs since ’97, some in a Latin/Afro-Cuban vein, some explorations of his Ukrainian/Jewish roots, some jazz, and combinations/cross-pollinations thereof. (He accomplished these with the assistance of such swells as Santi Debriano, Cindy Blackman, Bryan Carrott, Vic Juris, Omar Sosa, and Cyro Baptista.)

His latest, Jazz Brasil, is Weinstein’s fourth foray into the sounds of Brazil. On this set, he takes three Monk tunes down Brazil way, covers some bossa nova gems, a couple of unlikely jazz tunes, and even a Weinstein original. It’s a richly varied set—it kicks off with a brisk, perky (though not saccharine), punchy, and piquant take on Monk’s “I Mean You.” Drummer Marcello Pellitteri crackles here, sounding more like a percussion section (overdubbing?) than a single drummer while sidestepping any too-busy-ness or clutter. The foursome vigorously swings here, almost like it had something to prove. The lads keep it up with one of two Antonio Carlos Jobim tunes, “Triste.” The MW4 does what older jazz fans used to (and likely still do) call “cooking on all burners.” Wayne Shorter’s chestnut “Nefertiti” gets an interesting rendition—it’s on the tightrope with “pensive” on one side and “upbeat” on the other. Monk disiple Kenny Barron’s solo here is pure poetry. Herbie Mann’s early fusion mini-hit/classic “Memphis Underground” steps away briefly from the album’s Brazilian theme for some earnest, in-the-pocket, groovin’ soul-jazz. Pianist Kenny Barron gets into the act with real flair, getting in touch with his inner Bobby Timmons (or is that his inner Ramsey Lewis? Whatever.) with some beautifully spare, thick bluesy notes (with just a hint of BBQ sauce flavor). Weinstein himself puts a nifty, novel spin on this by featuring his bass flute, from which he gets a breathy, husky yet debonair tone, swinging all the while. Weinstein’s combo satisfies their bebop jones with an achingly pretty, straight-ahead/non-Brazilian-sounding version of Jobim’s “If You Never Come To Me.” Bassist Nilson Matta gets to shine here with a sinuous, gently buoyant solo. Weinstein’s solo floats like an ethereal romance, and Barron’s is curt and luminously lyrical.

If you are one that thinks “delicate” when they hear “flute,” forget that. Weinstein’s approach is full-bodied and surging and loaded with swagger and swing. Like Dexter Gordon, he emotes sturdily, soulfully, and with dignity on ballads (“Ruby My Dear”) and can soar like Sinatra winging his way south, to a warmer place, on the up tempo numbers (Joe Henderson’s “Isotope”)…with the world on a string, naturally. The MH4 play with alacrity and economy (no excessive or rambling solos at all) throughout. All thumbs way up.