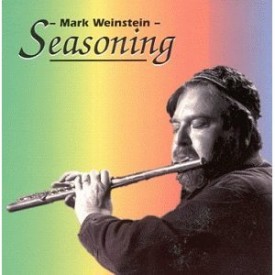 There is a warmth to Mark Weinstein’s tone and a lyrical phrasing that is most pleasing to the ear. In the CD’s liner notes it is stated that Weinstein’s goal was to play jazz flute with the fluency and breadth of a saxophone. In that case, the names Stan Getz, Paul Desmond and Gerry Mulligan come to mind.

Weinstein is accompanied by some very capable and competent sideman. Cecil Brooks III is the drummer throughout the record and percussionist Bryan Carrot is featured on vibes or marimba on several tracks. The bass chair is shared by Dwayne Dolphin and Chris White and the guitar duties are alternated between Rob Reich and the well known Vic Juris. Everyone works cohesively as a unit complimenting Weinstein’s flute beautifully.

What I really enjoyed about this disc, besides the gorgeous music, is how easily and effortlessly listenable it is from beginning to end. The disc contains twelve tracks just are there are twelve months in the year and attempts through music to audibly describe and illustrate the connection of the four seasons. Thus the disc’s title “Seasoning.” It begins with Weinstein’s original “Winter Song” which is followed nine songs later by “Fall Guy” also by Weinstein. In between these two, you will hear the Rogers and Hammerstein standard “It Might As Well Be Spring” and the George Gershwin masterpiece “Summertime.” Other classic compositions on the disc include Cole Porter’s “Night and Day,” Jerome Kern’s “Yesterdays” and “You Stepped Out Of A Dream,” written by Gus Kahn and Nacio Herb Brown. Tunes by jazz greats such as Randy Weston, Horace Silver and Thelonious Monk are also represented as is Brazilian music legend Antonio Carlos Jobim. All of the tunes gel together perfectly from beginning to end. I highly recommend it.