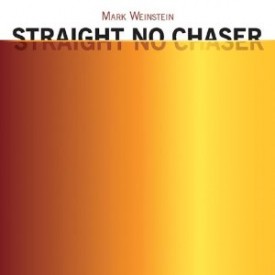 Reviews of Straight No Chaser

This time of year top-ten lists abound. On any given day, the few dozen records that I covered in print this past year could easily occupy a slot somewhere at the top of my list.

For each title that gets ink, there are a few others for which there just isn’t enough space. So, I’d like to start the New Year by offering a tip-of-the-cap to some worthwhile discs from the past year that you might wish to consider checking out. Jazz has had very few full-time practitioners of the flute. Herbie Mann, Hubert Laws, and Dave Valentin quickly come to mind. Many other such as Rahsaan Roland Kirk and Yusef Lateef have very capably included flute as part of their instrumental arsenal.

Flautist Mark Weinstein has been a part of the scene for more than four decades, yet his is a name many aren’t familiar with.

Last year he released a pair of albums which should go a long way toward garnering him overdue and well-deserved recognition.

“Straight No Chaser” is a solid date on which he is at the helm of a quartet that includes guitarist Dave Stryker. Comprised primarily of original music, gems by Sonny Rollins, Wayne Shorter, and Thelonious Monk’s title track provide important points of reference that Weinstein is eminently capable of playing straight-ahead jazz.

On “Lua e Sol” he artfully mines the Brazilian vein. Ably abetted by the classical guitar of Romero Lubambo and percussion from Cyro Baptista, much of the disc rides a gentle lilt as it shimmers with genuine South American warmth.

A lesser known facet of Brazilian music bubbles to the surface on the title track. Weinstein describes it as “that very dark avant-garde thing that Brazilians do that not too many people know about.”

Breezy and easy, these two CDs are toe-tappers which will go a long way toward warming up a frosty winter night.

by James Lamperetta — The Saratogian

I’ve long been a pushover for jazz flute, so reading in this CD’s notes that the flute has largely replaced the clarinet as the main doubling instrument for saxists really caught my eye. Mark Weinstein was originally a trombonist and heavily involved in Latin jazz in the 60s, but like a number of jazz musicians he eventually became disillusioned with the music business and went into other pursuits.

Now he’s back and has so far released 14 varied recordings involving the flute – many of them in the Cuban jazz tradition. This one, however, is straight ahead jazz. He plays several different kinds of flutes and sees himself as following the path that the great Herbie Mann took, specialize in the flute. (The liner note writer is author of a book titled The Flute in Jazz: Window on World Music.)

The imaginative and creative lines played by Weinstein on these ten tracks show that he is a specialist in the flute – not just a musician who picks it up once in a while. He has a lot of little melodic twists that add interest and contribute to the rhythmic propulsion. He plays the album’s title tune by Monk on the bass flute – I’ve always liked the rich sound of that instrument, and Weinstein plays it beautifully. Other jazz classics here come from Sonny Rollins, Wayne Shorter and Matt Dennis, plus three Weinstein originals. The combination of flute and guitar is a good one, which works just as well in jazz as it does in classical and ethnic music.

Jazz flautist Mark Weinstein is best known for his extensive body of work in the Latin jazz genre, which has always been an essential element of his music once stating “My music is rooted in deep Cuban folkloric traditions.” This latest release breaks with that tradition vigorously demonstrating his more than capable chops with straight ahead bebop jazz. Weinstein lays the foundation for an impressive musical portrait by assembling a canvas of all-star musicians including guitarist Dave Stryker, bassist Ed Howard and drummer Victor Lewis.

Together Weinstein’s quartet paint a picture of contemporary bebop music providing new and interesting interpretations to jazz classics such as, of course, Thelonious Monk’s signature tune, “Straight No Chaser,” the Sonny Rollins standard, “Airegin” and Wayne Shorter’s “Miyako.” Adding to the unique approach of the album is the fact that the music relies totally on a rhythm section void of the piano and eschews the horns leaving Weinstein and Stryker in lead roles. Stryker does a marvelous job especially on the bluesy “Blues For Janice,” and on his originals “Shanti” and “Crianza.”

This is however, Weinstein’s show and he proceeds to put on a superb performance right from the opening “Loverin'” track where he delivers a furious solo and continues throughout the album playing soprano, alto and bass flute. Other noteworthy contributions here include the Kaper %26 Webster standard, “Invitation,” and the Matt Dennis chart “Violets For Your Furs.” Kudos to Mark Weinstein for “Straight No Chaser” is another winner of a recording sure to attract more critical acclaim for a jazz legend in the making, if he’s not considered one yet.

Guitarist Dave Stryker lends both tastefully restrained fretwork and this composition to flutist Mark Weinstein’s latest album. On this lovely, minstrel-inspired ballad, each band member is allowed to stretch his harmonic concepts. Bassist Ed Howard puts in a flowing solo followed by Stryker’s tender acoustic guitar rendering. The format of guitar, flute and bass has a somewhat medieval quality, and when Weinstein’s airy flute enters the fray he extends the fairytale feel. Victor Lewis gently pushes the tune along with sparse but tasteful use of a subdued marching snare and shimmering cymbals work. When Lewis is set loose toward the close of the song, he responds with consummate taste and style. This almost-baroque composition is an unusual vehicle for these musicians, who can easily let fly on more up-tempo material. But it is a perfect showcase for Weinstein’s pristine tone and the band’s astute ability to adapt to the context of their material.

by Ralph A. Miriello — Jazz.com

Fluter Mark Weinstein’s Straight No Chaser is a collection of five originals and five covers. He and his band exhibit exceptional skill and taste as they interpret these compositions. Weinstein plays the classic “Straight No Chaser” on a bass flute. You hear his deep and forceful breaths almost as much as you do the frantic notes that result. This causes his playing on this piece to have almost a scat-singing effect. The clanging of the flute’s keys is quite audible as Weinstein aggressively attacks them. This is also cool sounding. Who would have thought of playing a flute low and rough? The band attacks the tune from the start. Guitarist Stryker is particularly impressive during his solo, after which “Straight No Chaser” becomes a swinging affair. As I have mentioned in other reviews of flute players, they must work extra hard to get their instrument to be more versatile. Weinstein should be credited for his imagination and successful effort to put the flute across in a new light on this cut.