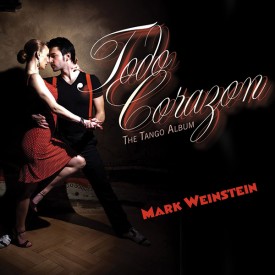 Mark Weinstein’s modus operandi is simple: He follows his interests at any given time. He found success as a groundbreaking salsa trombonist early on, but that didn’t stop him from leaving his horn behind and entering the realm of academia. He earned a Ph.D in Philosophy, with a specialization in mathematical logic, and started teaching at the college level, but music’s magnetic effect pulled him back into performing. He returned to the scene in the late ’70s, born anew as a flautist, and he’s stayed that course ever since. He continues to balance his teaching side with his flute playing persona, but his restless spirit still manifests itself in musical endeavors. Over the past decade, Weinstein has taken a globetrotting journey on record, exploring the sounds of Brazil, Cuba, Africa and the Caribbean, and refracting what he’s absorbed through his flute; now, Argentina gets added to the list with Todo Corazon. This program finds Weinstein tilling the sensual soul of this South American land with some help from a well-equipped foursome in-the-know: Argentinian bassist Pablo Aslan, his piano playing band mate, Abel Rogantini, bandoneon ace Raul Jaurena and guitarist Francisco Navarro. Together, this quintet works their way through a heady collection of music with a light, yet lusty touch. Weinstein and Navarro often come across like musical soul mates locked in a dance of beauty, and Jaurena proves adept at making magic when he meets the leader in quiet spaces (“Mi Refugio”). Aslan takes on multiple roles here, delivering percussive bass grounding and rich arco lines with equal skill and verve. His ability to work his way into the fabric of these songs is remarkable, though not surprising given his own small, but admirable body of work. Rogantini brings a greater sense of structure to the music, yet still manages to give off the scent of seduction and mystery that’s expected. Weinstein is his usual masterful self, delivering classy lines that shimmer, sing and glide atop the rhythmic waves of his colleagues. His respect for this music comes through at every turn, but it’s also clear that he yearns to take it some place else, where his jazz sensibilities can merge with the tango at the cellular level.