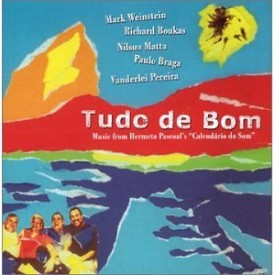 Some forty-odd years after Charlie Byrd first brought the then new Bossa Nova to the attention of the jazz world and started the Bossa Nova and “Cool Jazz” craze, and nearly a decade after the death of Antonio Carlos Jobim, the “father” of Bossa (more accurately, one of its fathers), Mark Weinstein, himself one of the great legends of Afro-Latin and Afro-Cuban jazz, comes along with an album that’s as fresh and refreshing as anything that came out of that first wave of Bossa. “Tudo de Bom – Music from Hermeto Pascoal’s ‘Calendario do Som'” celebrates, as the sub-title of this album indicates, the genius and music of Brazilian multi-instrumentalist and composer Hermeto Pascoal, in the form of a selection of tunes from his “Calendario do Som” written from 1996 to 1997. Mark Weinstein’s “Tudo de Bom” was released on LKC Productions / String Jazz Records on 18th November 2003.

Much has happened in Brazilian music and Brazilian jazz in the last four or so decades, but Bossa has never really been out of the scene and continued to evolve. It is therefore most gratifying indeed to have this collection of modern compositions, both of Bossa and other styles, by a giant such as Pascoal, arranged so skilfully by Richard Boukas and interpreted brilliantly by flutist Mark Weinstein and Boukas and the rest of the ensemble. Weinstein of course is forever engraved in the memory of any true Afro-Cuban/Afro-Latin jazz aficionado on account of his revelatory “Cuban Roots” album of 1967, one of the most seminal and influential albums of the genre, and its equally phenomenal 1996 re-working as “Cuban Roots Revisited” – Mark Weinstein having switched from trombone to flute in the intervening years, somewhere around 1973. He is equally well remembered as one of the pioneers of the trombone in Afro-Latin jazz and the foundation of Eddie Palmieri’s trombone section, long before “Cuban Roots”. “Tudo de Bom” is Mark Weinstein’s latest album. Playing flute and alto flute here, Weinstein clearly is still at the very height of his powers, his flowing improvs are a sheer joy of imagination and invention, his voice and technique peerless now. With “Tudo de Bom”, Weinstein amply demonstrates that there’s still plenty of life and mileage in Bossa and related styles, and that “Cool” can still be real cool. Weinstein’s flute is as cool and refreshing as a summer breeze.

Right from the opening “Song #81, Bossa Nova”, Mark Weinstein’s “Tudo de Bom” grips you and never lets go. Throughout, Richard Boukas’ contributions particularly on guitars and vocals are also outstanding, as is the work of the rest of the ensemble. You get a great sense of the fun everybody must have had in making this album. Two of the thirteen pieces are Bossa Novas, the rest Choros, Valsas, Baiaos and a Samba (adapted from a Valsa original) and Maxixa. Two of the Valsas are combined with a Guarania and Marcho Rancho, respectively. It would be pointless to go into each piece individually, they are all consistently strong and equally exquisite. The titles consist of simply a song number and the name of the style of the piece, arising out of the nature of Pascoal’s “Calendario do Som”, which consists of one brief composition written each day over the course of an entire year in celebration of his sixtieth birthday. The thirteen pieces selected here well represent the vast diversity and harmonic and melodic inventiveness of Brazil’s leading contemporary composer. Each piece is like a delicate, intricate little vignette, revealing fleeting glimpses, the compositions and arrangements as fluid as Weinstein’s improvs, dancing lightly through the air, as an ethereal wisp of cloud, relaxed, laid-back and joyous, rich and vibrant.

Essential in any serious Brazilian or Afro-Latin Jazz collection, as well as of course any general Bossa collection, Mark Weinstein’s “Tudo de Bom” is indeed a worthy tribute to Hermeto Pascoal and indeed to Brazilian music which it represents at its very finest.