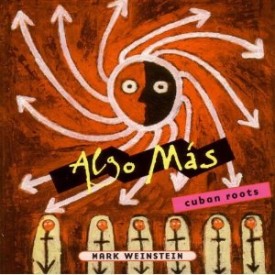 While never the household name that Herbie Mann and Dave Valentin have been, this Brooklyn-born jazz flutist and innovator was making influential recordings back in the ’60s — both as a trombonist with Eddie Palmieri & His Conjunto La Perfecta, and with his own first solo recording, Cuban Roots. That album introduced the Latin jazz community to the concept of post-bebop performed with traditional Afro-Cuban drumming. Compelling, quirky and seductive, the polyrhythmic Algo Más offers a swirl of Mark Weinstein’s peppery improvisations, crisp electric guitar by Jean-Paul Bourelly (“Vientos de Oya” is a particular highlight), the steady drumming of Pedro Martinez (who also vocalizes brilliantly) and several masters of Cuban percussion. Tunes like “Aguas de Ochun” swing gently into Afro-Cuban territory, while “Mamita Dances” dances amidst various percussion patterns and high and low flute harmonies and melodies. The repertoire borrows mostly from Afro-Cuban religious traditions and from popular street rumbas, and the execution is both organic and authentic, bringing the listener to the musical and spiritual soul of Cuba.
–Jonathan Widran, All Music Guide